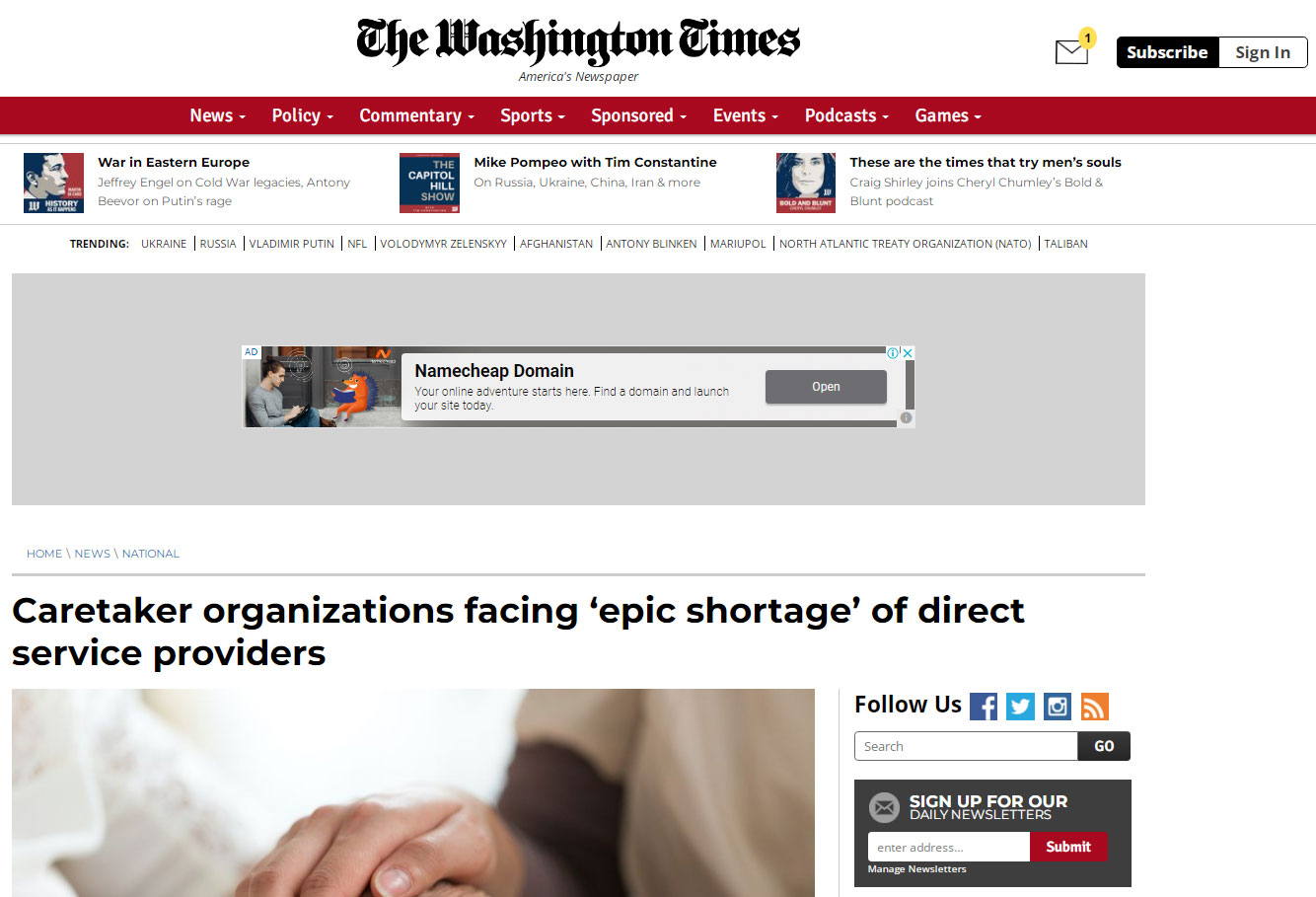 Ernestine Bryant cares for adults with disabilities, and she recently received her first pay raise in five years: She now makes $9.50 an hour, up from $9 an hour.

A direct service provider in Tifton, Georgia, Ms. Bryant is living paycheck to paycheck and considering leaving the field for a higher-paying job.

As an employee of Diversified Enterprises, Ms. Bryant has remained a direct service provider (DSP) longer than many others. She is laboring in a field with a high turnover rate and a shortage of workers.

An estimated 8.2 million more direct care workers will be needed through 2028 because of turnover and job growth projections, said Joseph Macbeth, president and CEO of the National Alliance for Direct Support Professionals Inc.

“The question should be ‘Where are they going to come from, and how are we going to keep them?’” Mr. Macbeth said.

About 1.4 million Americans work as DSPs, aiding people with intellectual and developmental disabilities. Mr. Macbeth said the industry has an average annual turnover rate of about 43%, meaning 600,000 professionals leave their jobs each year, based on data from the National Core Indicators Staff Stability Survey.

Dr. Craig Escudé, president of IntellectAbility, which provides resources and training to agencies that support people with disabilities, said the pandemic has increased the turnover rate. Some workers or their relatives have become ill, causing DSPs to leave their jobs.

“There’s also a lot of fear in this field as well because, if staffing is short and, let’s say, you are working in a home and it comes to the end of your shift and there’s no one else to fill that shift, you may be asked or required to stay there longer. So, you might be having to work a double shift or even a triple shift,” Dr. Escudé said.

Many states have reported being so short-staffed that some DSPs are bringing clients to emergency rooms because they cannot provide services and care for them, he said.

Half of U.S. states have reported permanent closures of Medicaid home and community-based service providers since the COVID-19 pandemic began, Disability Scoop said Friday in a report citing the Kaiser Family Foundation.

The survey, which included responses from service providers in 41 states through mid-July, found that 25 states reported at least one provider that had permanently shuttered its doors.

“It’s never been this bad,” she said, noting an annual turnover rate of 50%.

The organizations have budgeted to have two DSP staff members for every four people in a group home, but Ms. Wilush said they can staff only one DSP at most places.

“We don’t have the people,” she said. “It’s a very complex job that has always been undervalued.”

More than 472,900 people were on states’ waiting lists for home and community-based services, according to the Case for Inclusion 2020 report, a collection of data and policy recommendations about Medicaid programs for people with disabilities.

“It’s a crisis that is growing every day,” Ms. Wilush said. “It’s an incredible situation that we can’t figure out the answer to.”

Two UCP homes in South Carolina are competing with manufacturers in the hunt for employees. Ms. Wilush said UCP can’t offer manufacturing wages and is considering closing the two homes for lack of staff.

DSP turnover rates ranged from 24.4% in the District of Columbia to 68.8% in Nebraska, according to the Case for Inclusion 2020 report.

Because of the chronic turnover, Ms. Wilush said, DSP organizations cannot provide the highest quality of care and services. She said it takes time for clients to build relationships with their caretakers and for DSPs to get a good sense of those in their care.

Ms. Bryant, the direct service provider in Georgia, said she has known her clients for at least a couple of years and has grown close to them. She said she would consider staying to work as a DSP if the job paid more.

“Nine, 10 dollars, 11 dollars an hour for the job that we do — I don’t think that’s good enough because it’s not an easy job,” she said. “You’re caring for someone, especially for some individuals where you have got to do everything for them.”

“You love doing a job and you have gotten so involved in that program with the individuals that you support, and they’re just like a family to you. And they have known you for so many years, and all of a sudden you have to leave because the pay is not good enough for the hard work that you do,” Ms. Bryant said. “And then they’ve got to hire someone else to replace anybody that’s leaving, and they’ve got to start all over again.”